If you decide to renounce your citizenship you are giving up a lot of your rights and protections as a member of the United States. American citizens enjoy certain benefits and privileges. One of those benefits is the social security system. This is a federal program that is designed to provide basic needs to people who are unemployed, retired or disabled. Benefits are also paid to people to lose This program was started in 1935 by former President Franklin Roosevelt. The ultimate purpose of Social Security is to help people to survive financially. If you make the decision to give up your rights as an American, then you might lose your Social Security benefits. Don’t forget that social security benefits affected by dual citizenship are a reality. Keep in mind you do not automatically lose your awards because you decide you no longer want to be an American. However, you should not be surprised by renouncing citizenship, it will affect your social security benefits. The truth is that every person’s circumstance is different. You must figure out how your lack of citizenship will impact your benefits from the Social Security Administration (SSA). The IRS can also be involved in this process.

The agreement is important for preventing people from paying social security to the taxation departments of two different countries. Totalization is also important for helping to fill gaps in benefits protection for workers who were employed in the U.S. and within another nation. In other words, people who worked at home and abroad (in a foreign territory) will be able to receive their benefits that the other country (or the U.S.) might not provide. The United States has a Totalization agreement in place for some nations with similar social security agencies. This agreement is in place for collecting social security abroad. This is why it might not be a good idea for renouncing citizenship affect your social security benefits.

SSA Or IRS has the Final Say

The SSA or IRS will also consider the country where you plan to relocate once you renounce your citizenship. They will decide if you will receive your benefits based on that decision. Another consideration for the issuing of benefits has to do with current citizenship status. If you lose your citizenship due to some action against the United States, you might have to forfeit your social security benefits. Collecting social security abroad can be complex and the SSA can help you through the process.

Keep in mind that you can give up your citizenship by:

Here is a list of nations that have a totalization agreement with the United States: (Keep in mind, countries with this type of agreement in place are referred to as Green Zone Countries)

Countries Considered in the Yellow Zone

Yellow Zone countries will provide benefits to people who remain outside of the United States. Other factors such as being a non-citizen of those territories will also influence what the SSA will decide to do in terms of your benefits. There are many factors to consider and you will need to contact this agency to find out what they will do in your particular situation. Yellow Zone countries include includes places such as Albania, Grenada, Mexico, Philippines, Serbia, and Turkey. SSA will list other Yellow Zone nations on this list.

If you decide to relocate to a Red Zone country then you will not receive any benefits from the U.S. These countries include places such as Cuba, North Korea, Ukraine or Vietnam. They simply do not have a mutual system that is compatible with the SSA agency within the United States. American citizens who live in a Red Zone country will have their benefits accrue with the SSA until they return home. You must know how the system works if you plan on collecting social security abroad. The Social Security Administration and the IRS will provide more detailed information about renouncing citizenship and its impact on SSA benefits.

So What Do You Need to Earn Social Security

First, most people who enter the U.S. After the age of 65 typically do not have the 40 credits needed to get social security assistance. They also probably will not work long enough to gain the credits needed for this benefit. If you fall into this category don’t worry. There are other options that you can use to receive benefits. Now, if you are still wondering can immigrants over 65 receive social security then you must keep reading.

Working In the US For a Number of Years

A senior citizen who is over 65-years-old could possibly receive benefits if they worked for at least 10 years within the United States when they were younger. This should be good news for you if you fall into this category. Work credits are designed to let the SSA determine who is eligible to receive benefits and who is not. Some immigrants over age 65 could be able to receive prorated SSA assistance if they work for at least a year to a year and a half and earn at least $1,260.

Immigrants can receive benefits from one country but not from another. They also do not have to pay for social security from two countries. Remember that immigrants who have earned 40 work credits while in the U.S. Can return home and still receive their benefits from the U.S. Just keep in mind that a person must be from a country where a Totalization Agreement is in effect. The SSA states that at least 80% of all immigrants do not have enough credits to receive benefits. The bottom line is that a person must have enough work credits to earn social security benefits in their former homeland or within the United States. 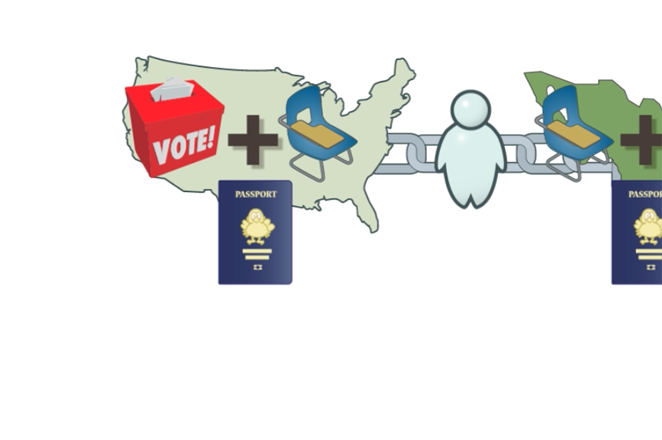 Each country will determine how much money a person will receive based on the number of years they worked, how much they paid into each system and laws governing this type of activity. In other words, as long as a person with dual citizenship has 40 work credits they can receive a payment. Also if you are a person with a dual citizenship you should not do something to compromise your status; otherwise your benefits might stop.

America has some agreements in place with different countries for the purpose of combining work credits under the SSA. This is another reason why social security benefits affected by dual citizenship is so complex. This way, a dual citizen can receive credits from their other country of residence as well as the U.S.A. This process is known as Totalization Benefits. It is a useful procedure for people who have worked under multiple social security agencies within different countries. Dual citizens will are not guaranteed to receive benefits from both countries where they are residents. However, if they do; both SSA departments from each territory must agree to pay these benefits. Many SSA organizations from different Totalization agreements will pay a dual citizen money if they believe a worker is entitled.

Get ONE monthly email with updates on Medicare, Medicaid, Health Insurance and Financial Advice.

We will NEVER sell your Email.

While we understand to many ads can be an annoyance we kindly request you allow our ads as it provides us the revenue necessary to keep our site up to date. Our ads are limited, relevant ads and will never cover up content or get in your way, this we promise. Thank you and we hope you find our website useful.